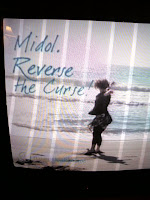 My wife spotted an ad on TV tonight for Midol that has the tagline...I kid you not..."Reverse the Curse". Thank god for TiVo - I only had my cameraphone to get a screenshot but it's enough.

Nevermind the general cheesiness of the tagline, but I can't imagine they'd be dumb enough to run this ad in Boston. It hasn't been THAT long since my beloved Sox eliminated the "Curse of the Bambino" and took down the "Reverse the Curse" sign on Storrow Drive.

Then again, Bayer is dumb enough to run such a dumbass ad in the first place. And it's not just dumb because I'm a guy, even my wife thought it was stupid.
Posted by Aaron Read at 8:50 PM