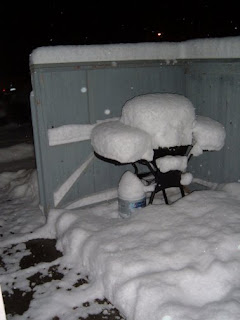 But even by my jaded standards...this is a bit much. First month in Rochester and we are getting BURIED in snow. It's basically snowed nonstop for two days...it's hard to say exactly how much is out there; it's been pretty cold so the snow is really powder-ish...blows around a lot. But this pic of my grill kinda says a lot. Maybe 8 or 10 inches plus?

And this is AFTER about four inches fell four days ago and then melted before this storm hit.

Oh yeah, and anyone who says "lake effect" doesn't really reach the Thruway? Completely full of it. Yes indeedy. Plenty of snow on the Thruway.
Posted by Aaron Read at 9:11 PM