Why Are So Many Libertarians Hypocrites When it Comes to NPR?

If the service pubcasting provided "was indeed so valuable that we, the American people, could not do without it," writes libertarian blogger J.J. Jackson, "they would not need to beg their government benefactors for a single dime. "

God I'm tired of hearing this same, tired, bullcrap argument from the right.

First, if "the American people" didn't want their tax dollars...a tiny percentage of them, I might add...going to fund public broadcasting, then they wouldn't scream and howl every time the right tries to slash funding for NPR and PBS. And the right tries it every other year (at least) and always gets the same results. What was that saying about insanity being defined as doing the same thing every time and expecting a different result?

Second, and more pertinent to Jackson's hypocrisy, is that the vast majority of NPR and PBS affiliate stations are non-commercial licenses. That means they cannot, by FCC law, sell advertising. They're restricted to what's called "underwriting", which is basically advertising but with very, very strict limitations on what can be said. Limitations that make it all but impossible to attract the most common advertisers you see on commercial radio and TV: car dealers, beer ads, etc. The advertisers willing to pay serious money for ad time.

If Jackson were really a libertarian, he'd be clamoring for the FCC to remove the underwriting restrictions from non-commercial radio and TV licenses....thus opening them up to the more lucrative advertisers, and allowing them to become more fiscally self-sustaining. Instead, he just doesn't like what NPR/PBS have to say, so he cloaks his indignation in a self-righteous spiel about wasted taxpayer money.

Of course, I personally would aghast if the FCC lifted those restrictions. One of the biggest reasons I like listening to, and working in, public radio is that there actually is almost a full hour of content for every hour...unlike commercial radio where there's 20 minutes (at least) of ads from every hour.
Posted by Aaron Read at 11:00 AM 1 comment:

Reading Paul Krugman's barely-contained, seething rant that Obama simply must hold inquiries into the (admittedly many) failures and outright abuses by the Bush administration, I had a couple of diametrically-opposed thoughts:
I think there's something to the idea that Americans' incredibly short memories are part of the reason why, despite making the same retarded mistakes over and over, we generally are a prosperous country. We're constantly reinventing ourselves as a nation, and letting go of the past...even to the point of foolishness. (Remember Enron?)

As a person who considers himself fairly intelligent and capable of heavy thinking...it bothers the crap out of me that Americans' stupidity might be the biggest reason why the country continues being generally better than most other countries. (recent economic issues notwithstanding) Certainly after eight years of being shoved aside by conservatives, I - as a liberal/libertarian - am not ready to just forgive and forget.

In fact, I often feel that we need eight years of hardcore liberalism (or at least serious progressiveness) just to drag everything in government back towards the center. As in, that's an indicator of just how far-right everything became under Bush. I have no idea if it really works that way...but I won't lie that I find "healing the country" bipartisanship verrrrrry hard to swallow after the last eight years.
Posted by Aaron Read at 9:20 PM No comments:

A Pilgrimage to the Land of Myth

My wife and I flew out to Oakland to visit my sister inlaw for Christmas this year. Like any good geek who visits the Bay Area, I made a quick pilgrimage to M5 Industries, Inc...home to the Discovery channel show "Mythbusters". It was 12/26 and a Friday, so unsurprisingly the place was closed. But as the sign on the front door shows, they're not set up for tours anyway.

Originally I was thinking that the outside doesn't quite look like what I remembered from the show...only after I got home did I learn that there's a separate building, M7, a few blocks away. And without knowing its precise address, I'd never find it...the area is very industrial and very nondescript. I drove right past M5's turnoff twice before I spotted it.

Still, here's the proof! :-) Check out these pics: 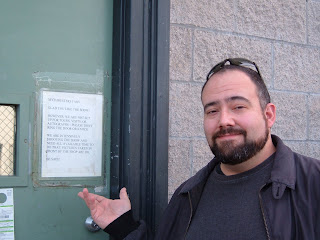 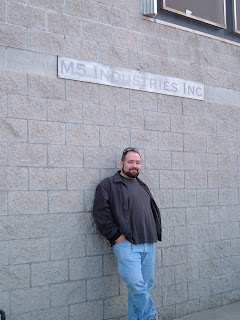 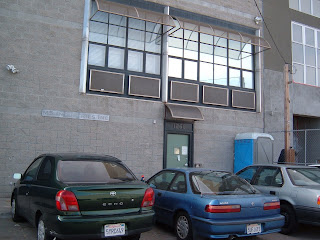 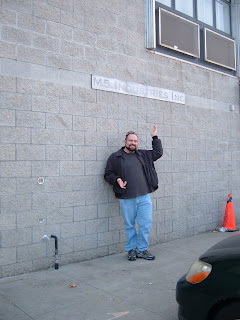