Public Radio is the Real Genius 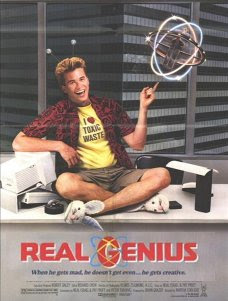 So WMKK has announced that they're going to refuse to air any commercials between 9am and 12noon. They're treating it as something quite revolutionary. Forgive my giant yawn; that daypart probably doesn't bill well to begin with...I would not be surprised if the only commercials that aired then were part of a bundle deal for more lucrative dayparts.

But the press release is what gets me:

"Three hours of uninterrupted, astounding musical variety; completely commercial free to start every work day is... sheer genius. An idea that revolutionary could only have come from The Mighty Mike FM," (emphasis added) commented Director of FM Programming Ron Valeri. "Finally, a station that is actually doing something about too many commercials on the radio." (10-17-07)
from Radio Online

Gee, so having no commercials is "sheer genius"? So I guess that means that public radio has been geniuses for over three decades! I know Ron's just trying to drum up some excitement for the idea, which he hopes will mean more listeners for his station. But that's showing some serious chutzpah when WMKK's 12+ ratings are about a quarter of what the local NPR powerhouse, WBUR, gets.

Bonus points to anyone who was in their teens or 20's in 1985 and thought that Jordan Cochran (Michelle Meyrink) was the hottest girl in the world. She was a "geek goddess" nearly a decade before it was cool. :-)
Posted by Aaron Read at 9:35 PM No comments:

Kucinich Just Got My Vote

Okay, maybe not for real...but after seeing Kucinich's appearance on the Colbert Report, and his proof that Stephen Colbert is literally in his pocket...hell, it's gonna be tough not to vote for him. Regardless of her political skills or anything else about her...I'd like to Clinton or Edwards pull off this amazingly classy act of self-depreciation as well as Dennis just did. I just don't see her capable of it. Obama, maybe, or Huckabee for sure, but nobody else.

I'll post a video clip as soon as I can find one; the whole bit is chuckle-worthy but there's two parts that had me bust-a-gut laughing.

UPDATE: As promised, here's a YouTube link to the clip.
Posted by Aaron Read at 8:48 PM No comments:

Well, I *was* worried about the Angels...

Despite having the best record in baseball, there was a lot to be concerned about with this year's Red Sox going into the ALDS last night. They're a great team to be sure, but now they're playing other great teams...and the Sox definitely have some glaring weaknesses. The Angels are always a threat to Sox happiness, so I was a little apprehensive last night.

Apparently I didn't need to be. Beckett threw a complete-game, four-hit, shutout...with a brilliant combination of precision and power, mixed up with some disgustingly filthy pitches that nobody could touch. Plus the offensive did rake poor Jake Lackey...who's never had good luck at Fenway (1-5 lifetime)...over the coals for two homers and another two RBI. BOOYAH! RED SOX UP 1-0 in the ALDS!

Tonight the real competition begins, though. The Angels have never faced Dice-K, so that should give him an edge. However, Dice-K has really shown the effects of season fatigue in the past month or so. Fortunately, he should be pretty rested going in tonight...let's hope he doesn't have the infamous one-inning meltdown.
Posted by Aaron Read at 8:13 AM No comments:

Email ThisBlogThis!Share to TwitterShare to FacebookShare to Pinterest
Labels: redsox

The irony is truly astounding here.
(from Current.org)

A measure of how far the cultural battle over broadcast indecency has shifted: New York's WBAI, the Pacifica station that successfully challenged the FCC over George Carlin's "seven dirty words," created a special program commemorating the 50th anniversary of the court ruling that deemed Allen Ginsberg's "Howl" not obscene. But the program is being distributed online, not over the air. Bernard White, WBAI p.d., tells the San Francisco Chronicle that broadcasting "Howl Against Censorship" would put the station at risk for $325,000 FCC fines for each "dirty word" in Ginsberg's poem. "This is about the public airwaves," says Janet Coleman, WBAI arts director. "If we can't control what goes on them, then how much freedom do we really have?"

I tried to think of something to say that would add something to this...and I'm coming up with nothing. I suppose having nothing to say is exactly what some more conservative folks want. Bleh. :-(
Posted by Aaron Read at 8:08 AM No comments: