Here are some of the specific projects I've worked on:

Radio broadcast engineers seeking to design and operate HD Radio(TM) transmission systems will benefit from the detailed exposition of the technology. The book lays out the entire structure of this digital transmission system. System equations are presented in a manner that is useful to those interested in them, while retaining a clear narrative for those who seek a general understanding of how the technology works. The book also presents a summary of the history of the technology and the NRSC-5 standard, as well as forward-looking information on emerging technologies and applications.

WEOS, aka "Finger Lakes Public Radio", was known for hosting live (or live-to-tape) broadcasts for national distribution under my tenure as General Manager.  We hosted several major shows, including: 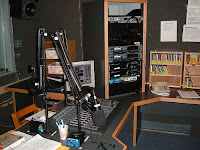 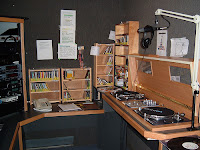 They had an aging infrastructure with PR&E BMX16 consoles that were at least 20% non-functional, not enough microphones to handle day-to-day operations, only one turntable, and one of their two studios was essentially unused due to broken equipment.

All of the existing equipment was removed and either scrapped or donated to other stations.  New studio-grade furniture was created by Ruthardt Woodesign, with custom-built wells/covers for new turntables - both designed for "club style" DJ'ing.  New CD players, microphones, and turntables purchased.   And the centerpiece was a new Audio over IP mixer system from Axia Audio.   The incredible flexibility of the Axia system gave the station the flexibility to have each of the two studios set up as a "mirror" of the other...making transitions from one live-DJ'ed show to the next a snap, and allowing all six microphones to be used at once if desired.

Additional pictures of the new studios can be found here:
http://www.flickr.com/photos/aaronlisa/tags/wzly/

WEOS/WHWS No-Engineer-Needed Sportscasts (2009)
WEOS/WHWS are twin radio stations based at Hobart and William Smith Colleges in Geneva, NY.  WEOS is an NPR affiliate, WHWS is a "college radio" station, but both air a substantial number of HWS sportscasts - over 120 annually across nine different sports, plus any playoff games, and there usually are...their teams are usually quite good.

The stations had a pretty effective system with two local professional sportscasters who would handle all the games and also recruit, train and mentor student sportscasters to come with them.  A major problem, however, was having in-studio engineers to run the mix board, play local spot breaks, and handle the halftime broadcasts.  These were usually students and, unfortunately, it was very difficult to fill all the shifts.

The solution was to leverage the stations' existing Burk ARC16 dial-in remote control with their Logitek AudioEngine mix consoles.  Combined with highly-reliable audio transport technology (usually fiberoptic audio transceivers from various arenas around campus, but also ISDN from a local hockey rink and a Comrex Access for away games) and Acer Aspire netbook computers running SoundByte...the sportscasters could use cellphones to dial into the Burk, enter a code, and put themselves on the air when it was game time.  The netbooks allowed them to play their own intros/outros, spot breaks, and halftime commentaries.

This setup saved over $4000/yr in staff costs but, more importantly, it allowed for a significant number of games to be broadcast that wouldn't have otherwise happened due to a lack of available in-studio game engineers.

WZBC - Boston College's radio station with a mix of students and community volunteers ("No Commercial Potential") previously had an elderly pair of Bext PA500 transmitters fed by an equally old Wilkinson Model X exciter.   One of the PA500's failed and the station could no longer make its necessary TPO for 1kw ERP.   Due to the age of the transmission system and antenna array, a total replacement was authorized.   Broadcast Signal Lab (aka Isotrope) was contracted to handle the project, and I was one of the two-man team working on it.

A Marti PnP1000 was purchased to replace Wilkinson/Bext combo, and a Shively 6813 4-bay half-wave-spaced array selected to reduce downward radiation (the tower is on top of a student dorm and some parents were nervous) and also to better focus RF outwards and compensate somewhat for WZBC's comparatively low tower height.  (a 50ft tower on top of Cheverus Hall dormitory at the peak of Chestnut Hill)

The Model X and remaining PA500 were pressed into backup service, and an automated transfer switch for the antenna array installed (along with a large dummy load) so that the backup transmitter could easily be put on-air remotely if needed.   In addition, the transmitter closet, filthy from years of dorm-dust being sucked in by a 1200CFM ceiling vent fan, was cleaned out, extraneous holes sealed, and a large filter placed on the remaining air intake on the door.