Out of Bounds with Tish Pearlman 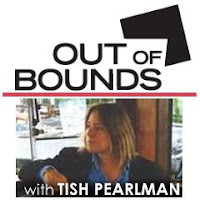 Just a little reminder to my readers that in my spare time I also serve as "syndication lackey" for the weekly arts-and-culture public radio show: Out of Bounds with Tish Pearlman and if you're interested in carrying the show on your station, it's available for free via the Public Radio Exchange here:  http://www.prx.org/group/oob

On a related note, you may also be interested in reading my articles about:


More about the show, after the jump...


About OOB:  Host Tish Pearlman created Out of Bounds in 2005 and has produced an intimate 30 minute interview every week with visionaries: people living, working and thinking outside the mainstream.  The show's slogan sums it up perfectly: We have a lot to talk about!

Similar to NPR's Fresh Air with Terry Gross, but with more a focus on arts and culture, the mission of Out of Bounds is to move beyond the "disrespectful ranting" of current popular radio, and to forge understanding among people of diverse backgrounds through thoughtful, in-depth conversations that educate and enlighten. This forum features well-known (Amy Dickinson, Deborah Tannen, Howard Zinn, Paula Poundstone, John W. Dean, Joe Crookston, Russell Banks, Alan Weisman and Janis Ian) as well as under-represented members of the arts, sciences, political and academic communities.   The show won Best Public Affairs Program (Radio) in the 2008 New York State Broadcasters Association Awards.

Tish Pearlman is the host of Out of Bounds.  She is a broadcast journalist and community and political activist.  A native of Manhattan Beach, California, and a 1986 graduate of The Columbia School of Broadcasting, Pearlman has worked as a host/interviewer on KPFA-FM in Berkeley, Live-105 in San Francisco, and two cable-TV shows: Out Talk Magazine and Q-TV, both in San Francisco. In Ithaca, she was the interim News Director/Morning Anchor on WHCU's Morning Report, as well as news anchor on WVBR's Mix in the Morning.