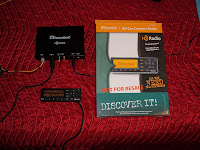 The "broadcaster's buy" from iBiquity in early 2007 included a new offering to the HD Radio tuner market: the Directed Electronics DMHD-1000 "car connect" radio. It's an "add on" tuner designed to work with your existing car radio. Overall I'd say it's a mixed bag: it has some good things, and it has some not-so-good things.

First a little description of the radio: the actual tuner/converter box is about the size of a small paperback book, meant to be hidden behind the dash or under a seat. A small, wired, display/control unit is barely bigger than the (mostly redundant) remote control that also comes with the unit. 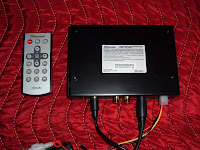 Rounding out the package are a wiring harness for power (with nice, long wires), some extra fuses, the equipment manual and two RF jumper cables with Motorola plugs so you can install the tuner in-line with your existing antenna. The latter is especially nice as it avoids the growing problem of Part 15 transmitters (for iPods and whatnot) causing interference to licensed stations.

The user interface (UI) is pretty good. There's not much "hidden" in the menus; most every function has a button you can find by touch. The radio has five preset buttons but uses a "bank" button to cycle through four rounds of presets, for twenty total. The display is a black LCD characters with an amber backlight. The dimmer & contrast settings are good – you can run the dimmer from very bright (suitable for daylight) to very dim (or even off). Contrast is flexible enough to handle most any viewing angle. 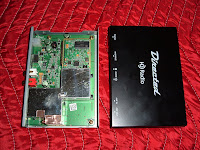 Like any good engineer, I like to see how intuitive the design is by working without reading the manual. I found I didn't need to check it for anything; the installation was pretty intuitive, save for one big exception I'll come back to. After my tests, I browsed through the manual (PDF) and found it to be reasonably well-written. The last page had a ton of interesting (albeit, somewhat cryptic) specifications, such as “1st adjacent rejection” (SNR=60dB at D/U = -25dB) and “post-detection bandwidth” for DBB (Adjustable from 8kHz down to 3.5kHz). See my blog for the full list of specs. Finally, there’s no visual indication of it, but the DMHD does seem to decode C-QUAM AM Stereo based on my listening tests.


Good morning Mr. Phelps
My greatest challenge (if I chose to accept it) with this review is that I live in the city, so I don't own a car. I had to borrow a friend's car, install the DMHD, drive around listening for the day, and uninstall it…leaving no trace. Ten years ago, the wiring on many car radios would've made this impossible…but today it was no sweat. 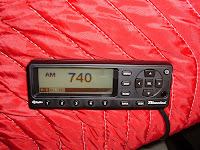 The test vehicle was a 2006 Ford Escape SUV that, by chance, also had a similar-styled XM satellite radio tuner. A little struggling with a DIN tool popped out the factory radio, the in-line RF modulator installed in less than a minute, and I jury-rigged the three power wires to a cigarette lighter adapter. In less than 30 minutes I was on the road.

Downtown Boston is notorious for multipath, intermediate-frequency and blanketing interference. As expected, the HD Radio signal really shined here; as soon as HD blended in, all the pops, hiss and clicks just disappeared. The XM satradio's RF modulator also co-existed nicely with the DMHD.

I did notice that for HD listening, the radio isn't quite as sensitive as I'd prefer, but it’s not bad. Large FM stations were no trouble, but smaller Class A FM stations have inherently low HD wattages, and they seem more susceptible to being "lost in the noise floor" on this radio. Analog reception was acceptable; there weren't any places where the Escape's OEM radio was getting noticeably better FM reception than the DMHD. AM listening is tougher since we only have three stations transmitting HD in Boston, but the DMHD didn’t seem to have any particular trouble acquiring a digital signal from any of them.

All-in-all, I wouldn't consider it "dynamite" radio for reception…but it's far from "deaf". Your average listener shouldn’t notice a significant difference in reception between the DMHD and most OEM car radios, nor with your average HD Radio car tuner. 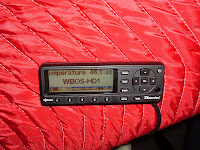 Keep your eyes on the road!
DMHD handles HD Radio PSD (Program Service Data) quite well; the display is not large, but the design & layout of the text makes the most of it. The “status bar” along the bottom edge will always contain critical info like call letters and preset bank.

The rest of the display can be cycled through several modes by the DISP button, and exactly what gets shown depends heavily on what the station is transmitting…in either HD or RBDS. It can be call letters, frequency, a slogan, artist/title, etc. If no HD PSD, or more generic PAD (Program Associated Data), is available the radio defaults to some combination of call letters and/or the frequency. Overall, I found most every mode was useful. A nice touch is the HD "program guide" mode which shows the current artist/title for all the multicast channels at the same time.

However, with RBDS I have one big criticism of PAD on this radio. If there is dynamic PS (Program Service name), as many stations have…each time the PS refreshes it resets the RT (Radio Text) field’s scrolling to the beginning. This means much of the RT field may never get displayed. Wait, isn’t this supposed to sound better?
Another big gripe immediately appeared when I tried to use the RCA line-level outputs: serious distortion! It sounded badly over-driven, although it got somewhat better as the tuning unit got warmer. A second and third DMHD proved to have the same problem. A call to Directed's tech support said I just return it for an exchange, but a colleague at iBiquity told me the solution he stumbled across: you have to ground the tuning unit's chassis (or in some cases, try grounding one of the RCA's shields). This is in addition to the ground wire on the power connector. I suspect many people will never even notice since they'll bolt the tuning unit to something metal behind the dash. But there's no specific mention of this in the manual, and if you don't ground it – the sound is inexplicably awful on the RCA outputs.


Conclusions
It’s hard to get around the problems with the RCA outputs…and the lack of documentation, or viable tech support about it, is disappointing. This is something I can see the average user immediately demanding a refund for their “broken” radio. The strange behavior of PAD from RBDS was also minor, but annoying and highly visible. And the tuning unit gets quite warm, although at least the documentation warns about this. 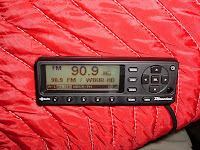 In addition, with an MSRP of $200 the DMHD1000 unfortunately has come out right at the same time Walmart announced that they’re selling the JVC KD-HDW10 car radio for $190. Of course, the JVC is a replacement radio; if you want to keep your existing car radio, the DMHD might be a good pick.