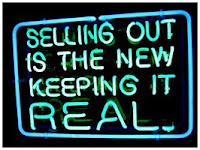 
First, what exactly is "underwriting"?  It's similar to advertising, but the FCC places several restrictions on what non-commercial licensees can say in an underwriting spot:
Exactly what defines "promotional" is not very clear and never has been.  For example, many public radio stations are good about points 2 thru 5 but push the envelope pretty far on being promotional.   If you want to play it safe, use the "Antonym Test."  (thanks to Koz at WBSU for that one)  Write your spot script, and everywhere you can, switch the words for their antonyms.  If the script suddenly makes no sense, then your script was promotional.


Second, how many underwriters do you need?   Your average college radio station needs about $50,000/yr in non-payroll budget.   This can vary quite a bit, but $50k is a good starting place.   Let's assume you'll charge $5 per underwriting spot (a spot is one mention on the air) which is pretty low, but it's a starting place.  That means you need 5000 spots per 13-week semester.  The principles of Optimized Effective Scheduling mean that many stations will need to run a spot at least several dozen times to be effective; let's say it's 70 times (5 spots per day for two weeks).  If you assume half your underwriters are long-term "sustainers" that buy spots for the entire semester (or longer), and half are "one-timers" that buy spots to promote a single event, that means you need convince, or "sell," enough businesses so that you have five "sustainers" and 35 "one-timers" or some equivalent ratio.

If you're a station with a larger signal, or a station in a larger (Top 50) market, you likely can charge more per spot and still get underwriters.  $10/spot to $50/spot can be perfectly reasonable depending on what the local market will bear.  If you need a starting point, ask around at fellow stations.  If none will tell you, ask your Student Activities Office if they've ever purchased spots on other stations, and, if so, ask what they paid.   Whatever your starting number is, remember to discount it by 10 to 30% so you have a competitive advantage over other stations!


Third, what are you selling to these businesses?  Unless you're a lucky station with a big audience, you're not merely selling a platform for them to hawk their wares to the general world.  Most college radio stations have too small an audience to be valuable enough to businesses in that way.  So what's the one thing that your college radio station can sell that no other station can?  Five words: access to the campus community.  Most colleges have significant "firewalls" between their student bodies and the outside commercial world.  Underwriting with your station is one way that businesses can safely "breach" that firewall and reach the student body in a politically acceptable way.

Now, since you cannot realistically expect that enough students are listening to your radio product...be it on the air or on the web...to be "sell-able" to businesses, you must be prepared to provide other "sell-able" opportunities for businesses.   Some ideas include:

This may well mean your station will have to do something it hasn't traditionally done before; perhaps more sportscasts, or more live on-campus broadcasts from the field.  But if you want to be involved and relevant to your campus community, you can't do it locked away in the station's studios.


Fourth, what are the ideal businesses to sell to?  Since you're selling access to the student body, you want to reach out to businesses that aren't already well-known by the student body.   For example, the local breakfast cafe across the street from your campus, that every student knows and loves, is a poor candidate for underwriting; they don't need to reach the student body.  However, the cafe hidden four blocks away that is desperate to get more business but is getting killed by their more distant location?  PRIME candidate.

That's usually a good place to start: find a business that has a competitor that's physically closer to your campus.  That competitor probably has all the business it needs, but the further-away business would love to get more!

Then there's the more targeted approaches:
Remember: if you are a student, you are effectively selling access to yourself!  What are you buying??  Poll yourself, your friends and your student staff and find out: what purchases they're currently making, what purchases they plan to make, and what purchases anyone else might make for them.  Filter based on the above principles, and then figure which businesses are good candidates to approach.

Fifth, what strategies do you use for selling?  Convincing local businesses to underwrite is all about relationships. Unfortunately, students are inherently ill-suited to this task by the nature of their transience. It's hard to build a "long term" relationship with someone when you'll be gone in a few years, and they know it. If a student has remarkably high charisma, that can overcome this factor. But again, soon enough that student will graduate and leave...so you can't build a long-term program on that.

Your college may have classes in advertising, marketing or even in salesmanship that your students can take (or audit) to help hone their skills.  That certainly helps.

You can attempt to lure a professional to sell your underwriting on a commission basis. But this requires a "perfect storm" of a professional. Someone who's reasonably good at sales, but is motivated to help you for reasons other than money.  Why?  Well, if they're any good at sales, they'll be able to earn a lot more money selling for a commercial radio station.  So there's needs to be another motivation for this person.  Perhaps an alum, or a relative of an employee, might work in this case.  Or a former employee who's retired or semi-retired and wants to help out while earning some cash.   Remember that selling is a lot of work and involves a lot of effort that only occasionally has a payoff.  You'll need to make the commission pretty juicy, accordingly.  10 to 25% is not out of the question.  Or even 50%!   While that eats into your net profits, 50% of something is always better than 100% of nothing!

Alternatively, you can establish systems that do the work for you. Try partnering with the local newspaper. Everyone who buys ad space in the paper can also purchase underwriting on your station at a nice discount, say 10 to 20% off. Give the paper a hefty cut of whatever you get. (at least 20-40% - it'll have to be juicy to get their attention) That way, you have the newspaper's own sales staff doing the work for you. But it's not much work for them, and they get a nice bonus from it.

Don't forget the campus newspaper: Whether or not they've successfully exploited it, the campus newspaper may have an inherent edge on attracting off-campus sponsors. Depending on how willing to partner with you  the paper is, and/or how expensive their ad rates are, you could secure a fixed number of ad spaces to put your own underwriting sponsors' messages in...subject to paper approval, of course. That way you can turn around and upsell your own underwriting to sponsors, by saying it not only gets their message on the airwaves, but also in the campus newspaper as part of the package.


Sixth, what other issues are there?  Remember that a business is turning over their hard-earned cash to you in exchange for something very abstract, and very hard to demonstrate that it has real benefit.  You owe it to them to treat them very professionally.  Keep solid records of when each spot aired.  Take pictures of any visual appearance of their sponsorship (i.e. banners at events) and include copies with invoices - especially if the photo shows lots of people seeing the banner!

Be prepared to act very quickly to get a spot script done and on the air; some sponsors will be desperate to boost ticket sales to an event that's happening very soon.  Be honest and explain that an ad blitz one or two days before an event may only have limited effectiveness, but since they are the customer, you are ALWAYS willing to do it if they are.  That means you must be ready to act fast to get that spot playing!

Make it easy and straightforward for your DJ's to play spots at their appointed times, and make sure you track and confirm that the DJ's are playing them!   Nothing's worse than a sponsor who says they were listening and didn't hear their spot...and it was because it wasn't played by a careless DJ.

Something to remember: your parent college is also out there getting businesses to sponsor the college, especially for athletics.  They may have no desire to coordinate or share with your station on that front.  So be prepared to be diplomatic if a sponsor says "I'm already buying a sponsorship with your college, why aren't I getting time on the station, too?"   Try working with your athletics department so their sponsorship packages include mentions during game coverage on your station, and the station gets a small percentage of the sponsorship (note that athletics can always ask for more total dollars to cover your percentage, and then some, because of the added value of having spots on the air, too).


While underwriting is neither easy nor simple, it is a solid process that can earn your station needed cash for operations, and to provide strong protection from a sale of the license.  And it also helps integrate your station into the local community and provides substantial goodwill that promotes town-gown relations.  A win-win for all involved!

Good luck and happy selling!
Posted by Aaron Read at 9:00 AM